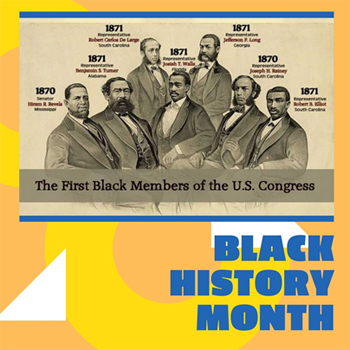 The first six African Americans elected to the United House of Representatives were all Republicans. The image below depicts those seven additional to Hiram Rhodes Revels.

David Barton in American History in Black & White summarized their background and service:
Pictured second from the left Benjamin Turner of Alabama. Turner was a slave during the Civil War but within five years after the war had become a wealthy and prosperous businessman.

Pictured third from the left is Robert De Large of South Carolina. Born as a slave, within three years from the end of the War he was serving in the State House; he also chaired the Republican Party’s Platform Committee and became a statewide elected official.

Pictured in the middle is Josiah Walls of Florida. Walls was a slave during the Civil War and was forced to fight for the Confederate Army; after he was captured by Union troops, he promptly enlisted as a Union solider and became an officer. Following his election to Congress, his credentials were challenged by Democrats and he was twice sent home. He was re-elected after the first challenge, Democrats regained control of Florida and he was prevented from returning.

Pictured fifth from the left is Jefferson Long of Georgia. Born as slave, he was self-educated and built a thriving business. However, when elected to Congress as a Republican, Democrats boycotted his business, causing him great financial losses. Long was the first black American to deliver a congressional speech in the U.S. House.

Pictured sixth for the left is Joseph Hayne Rainey of South Carolina. Born a slave, he actually served briefly as Speaker of the U.S. House and was in Congress longer than any other black American from that era.

Pictured on the far-right Robert Brown Elliott, also of South Carolina. He was well educated, reading in Spanish, French and Latin. In Congress, he led in the passage of civil rights bills; he later became Speak of the House in the State legislature.