The Journey to Better 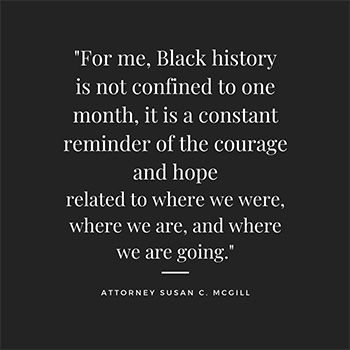 When most think of Black History Month, many find themselves retelling the stories of the trailblazers who made it possible to be where we are today. For me, Black History was always in my home because it is what I learned from my grandmothers, Martha and Mary Sue. Neither of my grandmothers had the opportunity to complete high school. They found themselves faced with racial inequalities and financial hardships that forced them to work instead of focusing on their studies.
Times were drastically different for them in the 1940s, 1950s, and 1960s. Now, Martha was over 15 years older than Mary, but they both described this span of time as very poor. For example, neither of them had a bathroom in their homes. Their houses were so poorly constructed that they could see chickens under their homes through the floorboards. They both used pasteboard to fill in the cracks in the walls and floors.

Both of my grandmothers worked for sharecroppers. Grandmother Martha lived and worked on the sharecropper’s land. Most years, they worked extremely hard and were able to keep some food to feed their families for the balance of the year. Once their cost for food was deducted from their earnings, they would receive the balance of that money. Mary indicated that on their worst year, she only received $50.00 payment for months and months of work.
As I reflect back on these stories, the one thing that comes to mind is their resilience. For them, they never focused on their circumstances. They always taught me that God would make a way. That did not mean they were not frustrated or disappointed at times, but what it meant for them was that they knew that God would not end on a bad note.

Even though they were unable to complete high school and could only dream about attending college, they poured their time and energy into making the next generation better. Each of them had six children. They reared college graduates, business owners, and military personnel that had to navigate adverse circumstances such as segregation and integration to become successful.

While I could provide many more stories regarding the injustices my grandmothers faced, that is not my purpose today. My purpose is to illustrate the tenacity and adaptability of my grandmothers. They both faced tremendous obstacles, but they both want or wanted what every parent or grandparent should desire for the next generation-better. Desiring more for the next generation has nothing to do with race or gender. I find it is a common desire for most people. For them, they both believed that better was coming. And, from where they started, better for them came. They knew better did not mean perfection, but it meant to keep the needle moving. My beloved Grandmother Martha last saw better in 1999, so her perspective was always quite different from that of Grandmother Mary Sue. Grandmother Mary Sue’s “better” is continuing to be defined.

So while we admire the giants we celebrate, I share this little bit of information to remember the grandmothers and my grandmothers that have made such a tremendous impact in our lives. Even though both of my grandmothers had very limited formal education, they both taught me more than I ever learned from any textbook or classroom. Most importantly, I am grateful to both of them for teaching me how to face adversity without becoming bitter. Thank you to all of those who sacrificed so much for “better.” For me, Black history is not confined to one month, it is a constant reminder of the courage and hope related to where we were, where we are, and where we are going.